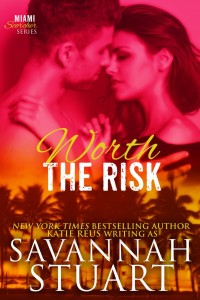 One man is getting in the way of her revenge…her mate.

Werewolf Marisol Cabrera has one goal in life: kill the man who murdered her entire pack. When she meets alpha werewolf Stephan and realizes he’s her mate, all her carefully laid plans dissipate in seconds. By all accounts, she should hate Stephan and everything he stands for. After all, he’s a dirty arms dealer doing business with her mortal enemy. Unfortunately, every time the dominating wolf gets close, she can’t deny her growing attraction for the last man in the world she expected to want.

But things aren’t what they seem…

Undercover DEA agent Stephan Lazos is about to make the biggest bust of his career, but everything that can go wrong, does. He never expected to discover his mate while on the job. She saves his life and his cover when he almost shifts in the middle of a crowded Miami nightclub, but that doesn’t mean he trusts her. The clock is ticking and if he doesn’t figure out what secrets the sexy she-wolf is keeping from him, he might not just lose his job, but his life in the process.

Stephan Lazos couldn’t tear his gaze away from the exotic brunette moving across the dance floor below. From his position in the VIP room, he had a perfect view of almost the entire nightclub. The only thing he could focus on, however, was one woman. The wolf inside him wanted to throw her over his shoulder, take her out of the loudest club in Miami and back to his place for a marathon of fucking.

His skin tingled and burned as he watched her. The unwanted physical reaction was starting to piss him off. She was hot, sure, but she wasn’t even his type. At six foot two, he liked his women tall and curvy. Once they got to the bedroom, he wanted a woman who had a lot of stamina and didn’t mind the sex a little rougher. The woman on the dance floor looked as if she’d fall over if a strong wind came along.

Long, dark hair fell down her back in waves. It looked as if she wore three-inch heels, and she was still short compared to the blonde woman she was dancing with. Everything about her was petite and delicate. Each time her hips swayed in tune with the blaring music, her silky red dress shimmered around her tight body. And each time that happened, his cock jumped to attention. The primal beast inside him wanted to cover every inch of her exposed skin so no one else could look at her.

He liked sex as much as the next shifter, but this was different and he didn’t understand his reaction. Since he was a pup, he’d never had to exert much mental control to keep his canines from extending. Now it was taking all his self-control not to change. And this couldn’t have happened at a worse time either.

He was in the middle of an assignment. All his focus should be on convincing Antonio Perez that he was a new arms dealer in town looking to expand to medical supplies and not an undercover DEA agent.

“See something you like?” Antonio’s voice caused him to step back from the balcony.

“I see a lot of ‘somethings’ I like,” Stephan said as he took a sip of his scotch. The one thing he hated about this undercover role was his playboy image. The expensive suits and drinks were a nice change of pace from playing the role of junkie or hired thug, but the Miami party scene left a lot to be desired. One of his brothers owned a club downtown and Stephan had only been in it a handful of times.

“Anyone in particular?” the other man pressed.

Stephan couldn’t afford to show any interest in one woman over another. There was no way in hell he could let Antonio think he had a weakness. “The group of women in the middle.”

“I’ll invite them up,” Antonio said as he motioned to two of his bodyguards.

Stephan shrugged, as if it didn’t matter one way or the other. However, his heartbeat quickened when the bodyguards ushered the group of barely dressed women up the stairs.

Her scent hit him with startling intensity. In this crowded, stifling atmosphere, his extrasensory abilities were working overtime. Alcohol, sex, the consistent thump of the bass from the speakers, it was overwhelming. Even so, he still knew the subtle jasmine scent that rolled over him was her.

As if she sensed him, she glanced around until their gazes locked. Her bright blue eyes widened when they made contact.

The word echoed loudly inside his head. His heart skipped a beat at the thought. It was impossible that he would recognize her so soon. Wasn’t it?

His brother Nick had told him what it was like when he’d met his mate, yet Nick hadn’t realized Carly was his mate right away. He’d just been possessive and a little obsessed with her. Maybe in hindsight he should have realized. Of course Carly was human, not a shifter. But even his parents hadn’t recognized one another right away. He’d always thought it would take time.

Mate. The word reverberated through him again. His wolf clawed at him, telling him to shut the fuck up; that was his mate. She was a wolf too, he could scent it. All mine.

Fuck, no. He refused to believe it.

He mentally shook himself, but his wolf just clawed harder.

Stephan had never imagined something being so physically overpowering that he couldn’t think straight. And he definitely hadn’t believed that he’d just know his mate on sight.

He set his drink on one of the high-top tables and started to make his way toward her. To his surprise, she flipped her dark hair over her shoulder in a haughty manner, turned her back on him and headed for the bar.

He refrained from growling. Barely.