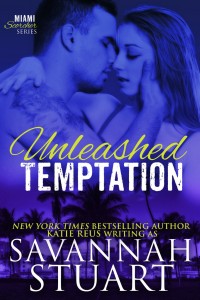 After finding out her boyfriend has been cheating on her with her boss, Carly decides her life needs a makeover. She trades in her winter coat for a bikini and heads south to Miami, Florida. Almost as soon as she arrives, she falls in lust with the sexiest man she’s ever laid eyes on. Too bad he’s her new boss.

He also just happens to be a shifter…

Alpha werewolf Nick gave up hope of finding his mate a century ago. When sexy redhead Carly comes to work for him, she disrupts his entire world. Although he desperately wants to come clean about what he is, he keeps running into problems. Like the fact that an ancient enemy has set his sights on Carly. Nick discovers he’ll go to any lengths to keep her safe. Even if it means losing her in the process.

AUTHOR NOTE: Unleashed Temptation was previously published elsewhere. It has been revised and edited.

Scrubbing a hand over his face, Nick Lazos sank into his comfortable chair with a sigh. He turned on his computer and sat back, waiting for it to start. After the last disastrous interview, he seriously hoped he had some new responses to his want ad. He couldn’t keep doing all this admin stuff on top of everything else.

When there was a soft knock at his office door he glanced at the wall clock. Inwardly he groaned. Even though he needed a new accountant, he’d been hoping the last interviewee wouldn’t show up today. His mother had talked him into interviewing one of her friend’s granddaughters. If she was anything like the last woman his mom had recommended—he fought off a shudder.

“Come in,” he barked. Better get this over with.

The door creaked open and for a moment, he forgot to breathe. This could not be the woman here to interview.

A pretty redhead took a couple tentative steps inside. Her ivory cheeks were flushed a delectable shade of pink. “Hi, I’m Carly Kendall. I hope I’m not late.”

Somehow he found his voice. “You’re right on time.” Instinctively he stood and motioned for her to sit across the desk. Now he wished he’d taken a few minutes to straighten up.

She wore a respectable dark blue pencil skirt and button-down blouse, but the effect on her was ‘naughty librarian’. Which was the last thing he should be thinking about. The shape of her perfectly rounded breasts pressed against her top and all he could think about doing was unbuttoning it and peeling it open slowly, inch by inch, as her delectable body was revealed to him.

What the fuck was wrong with him? He mentally shook himself, needing to get his shit together.

“I appreciate you taking the time to interview me. I wasn’t sure if you had it so here’s my résumé.” She slid it across the desk as she spoke.

“Why don’t you tell me a little about yourself and why you want to work here?” There, he got out a coherent sentence. He deserved a freaking medal for being able to talk when she was staring at him with those big blue eyes, begging him to do all sorts of bad things. Damn, he could practically feel his canines extending. As a werewolf, he’d learned to control his urges as a pup. For some reason, his primal instinct was overruling all those ingrained rules. When she nervously moistened her lips he realized he was staring a little too hard.