To Catch His Mate 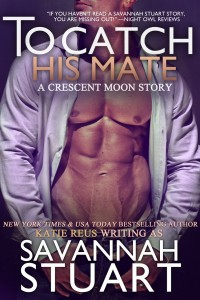 Pack princess Alyssa Clare was trying to come up with ways to get out of her arranged mating to alpha wolf Reece O’Shea—until she meets the powerful male. After getting to know him, mating doesn’t seem like such a bad idea anymore. But when he makes it clear she’s just a business arrangement for him and his pack, she calls off the mating and heads south to stay with a friend to lick her wounds in private.

But he’s not willing to let her go without a fight.

Reece can’t let Alyssa go, not when he’s completely fallen for the sweet, sexy female. He doesn’t care about the arranged mating deal, he just wants her and has no idea why she ran. To win her back he infiltrates another alpha’s territory, knowing it could mean his death. Luckily Grant Kincaid allows him in his domain—as long as Alyssa is okay with it. Convincing her that she’s all he wants is a bigger challenge than he imagined. But he’s not giving up, because he knows she’s the one he’s meant to be with forever.

Tonight Alyssa wanted to find out if there could be more between them than just some hot kisses. She already really liked him and not just in the physical sense. He was a good alpha, he’d been incredibly sweet to her since she’d arrived, bringing her over coffee and pastries every morning, and talking to her as if she mattered—unlike some alphas she’d interacted with. He was a little intense sometimes and she’d found she loved making him laugh or smile. She’d noticed he rarely seemed to smile except around her.

Pretty much his entire pack was at some Halloween festival at their local downtown but she knew he had paperwork to catch up on.

So she was hoping to catch him.

As she reached the top of the stairs she heard low murmured voices. Both male. One was definitely Reece. She got shivers just hearing the low rumble. Everything about the male seemed to affect her.

When she heard another familiar voice, she paused. Ugh, Reece was talking to Ben. For some reason the other male didn’t seem to like her and Alyssa couldn’t figure out why. She’d become friends with his sister, Sybil, the past few weeks and she couldn’t think of anything she’d done to warrant his coldness toward her. But the male just looked at her with annoyance.

Reece might have told her she had free reign here but that didn’t mean she wanted to see or talk to Ben. She started to head back down the stairs but froze at a growling sound.

Not Reece, but Ben.

On instinct her claws started to ache, ready to be unleashed, but her inner wolf stilled when Ben spoke. “Damn it! Why are you mating with her?”

“You know why.” Reece’s voice was calm but there was a deadly edge to his words that made it clear who was in charge. She was actually surprised that Ben had the balls to even talk to Reece like that.

“We don’t need the strength of her pack. We’ve been doing fine, more than fine, on our own for years. We’re strong enough without them.” There was a hint of bitterness in his statement.

“Are you challenging me?” There was a slamming sound, as if Reece had flattened his palms on his desk. “Because it fucking sounds like it. I’m alpha, I make the decisions. You don’t like it, you can leave.”

“I’m not challenging you.” Ben’s voice was more subdued now, but anger still laced his words. “And I trust you to make the right decisions. But it’s not right that you have to mate her.”

“No! You should be with Sybil. She’s strong, the kind of mate you deserve.”

When Reece didn’t immediately respond Alyssa felt the growing silence like a blow. She knew she wasn’t the strongest wolf, not physically. But she’d thought there was something between her and Reece—and more than just physically. Weren’t mates or intended mates supposed to defend each other? But maybe he really was just mating her out of a sense of duty. The thought of that made everything inside her go icy.

“Look, Ben, if things were different maybe I’d be with Sybil. But they’re not. I’m mating with Alyssa to solidify the relationship between our packs. So you need to deal with it.”

Alyssa swallowed back the sudden knot in her throat. His response hadn’t been particularly horrible, but it still hurt. He’d said pretty much what their mating was originally supposed to be; a unification of the packs.

She’d been prepared to fight the mating until she’d met him. God, she felt so stupid and naïve, thinking they might have had something more together. Clearly the last three weeks they’d spent together had meant way more to her than him.

Which…wasn’t his fault. If he didn’t feel the same way about her she couldn’t blame him. You couldn’t help who you were attracted to. And sure, he was attracted to her, that much she could tell. But his words to Ben had been so cold and casual. Maybe all their conversations and time spent together had just been him putting in his duty, doing what his title of alpha commanded of him.

Reece saw her as a business decision. She didn’t care if it was stupid, she wanted a mating based on more than that. More than pack responsibility. She wanted what her parents had had. Her mother had died giving birth to her, but her father had never gotten mated again because he’d loved her mother with everything in him and had never gotten over her death. And whenever he talked about her mom it was with love and adoration. Alyssa wasn’t going to settle for less than that.

Feeling foolish and more than just a sting to her pride, she looked down at the ball cap in her hand, her fingers clenching around the soft material. She didn’t care that it was pretty much a done deal as far as her father and Reece were concerned. She’d figure a way out of this mating no matter what.

Iciness invaded her veins as she realized the conversation between the two males had stopped. She wasn’t going to wait around until either of them saw her. Moving swiftly she backtracked the way she’d come, leaving through the front door with a quietness she knew rivaled any wolf’s stealth, even her father’s. She’d learned young that if she wanted to get out from under the watchful eye of her packmates, she had to be sneaky about it.

Reece’s pack lived in a quiet subdivision on the outskirts of a small but thriving South Carolina town. They owned all the houses in the neighborhood so there was no risk of any humans seeing big wolves running around. Not to mention the pack owned a hundred acres of forest that surrounded the neighborhood that they never planned to develop.

Right about now she wanted to strip and go running through the woods, but shook the instinct off. Her wolf just wanted to protect her, but she needed to figure out what she planned to do about Reece.

All she knew was, she wasn’t staying here. Not after what she’d just heard.