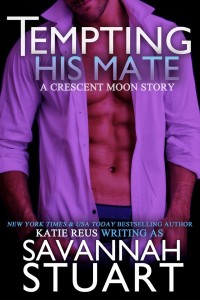 She ran from him once…

Wild one night stands are not Ella Hayes’s style, but with her confidence at rock bottom after a devastating betrayal and her painful departure from her jaguar pride, who could blame her for falling into bed with a sexy wolf? She never thought she’d see him again. And never in her craziest dreams did she expect to come face-to-face with him on her first day with the Kincaid wolf pack. Sleeping with Asher had been one of the most intense experiences of her life—but now she wonders if they could have more.

He’s not letting her go again…

Tired of life as a lone wolf, shifter Asher has joined his cousin’s pack. The last person he expected to see was the sexy woman who ran out on him in the middle of the most incredible night of his life. The Ella he meets now is nothing like the wild, sensual woman he let his guard down with, but he likes both sides of the complicated female. But now somebody—or something—sinister is targeting Ella, and Asher moves quickly to get her under his roof and under his protection. Keeping the sexy female safe and proving they belong together are two missions he doesn’t plan to fail. Because this time, he’s playing for keeps.

For the past six months—okay, way longer than that—she’d been feeling restless and ready to move away from her pride anyhow. Her sister’s mating had been the perfect excuse for her to pack up and head down to Gulf Shores, Alabama to live with her cousin, Lauren. Well, not with her, since Lauren was newly mated, but Ella was joining her cousin’s new wolf pack of all things.

Her cousin had mated a wolf and was now part of their pack. Once Lauren heard she was looking for a change she’d almost come up and packed Ella herself. And Lauren had refused to come to the wedding out of a sense of sisterhood. It didn’t matter that they weren’t actual sisters, Ella and Lauren had grown up closer than Ella had to her own younger sister.

She wasn’t expected for another two days so Ella had decided to take her time and tonight she’d stopped at a well known shifter bar in Montgomery. No humans were allowed in so shifters were free to be who they were. She’d never been, but had heard wild stories about it. Wild wasn’t normally her thing, but tonight it was perfect because she was ready to let her inhibitions loose. Just for one night.

As she motioned to the bartender for another shot, she glanced in the mirror above the bar and saw a sexy as sin shifter leaning against one of the six pool tables, stick in hand, as another man racked their balls. He wasn’t overtly tall, but he was broad—really broad, with muscular shoulders and biceps she could imagine running her fingers across. His dark hair reached his jaw line. Normally she didn’t care for long hair on a man, but on him it looked perfect. With about two days worth of stubble on his defined jaw, wearing faded jeans, a black leather jacket and shit kickers, he almost looked like a bad boy cliché. Tall, dark, sexy and a little brooding. Yes, please.

Her gaze traveled up from those beat up shit kickers, over the length of that powerful body to land on that insanely handsome face again and she realized he was looking right at her. With piercing green eyes, there was no mistaking it when they caught hers in the mirror.

Thanks to her shifter sight, there wasn’t even a doubt he was watching her. Her breath caught in her throat as she stared at him, completely snared. One of the men at the pool table said something and briefly diverted his attention, releasing her from that stare. It was like she’d been released from a trance. For just a moment everything around her had funneled out; sounds, sights, scents and anything not Mr. Sexy.