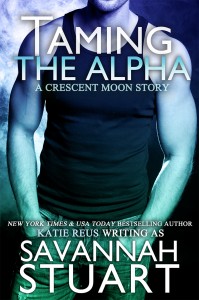 After a year of lusting after his sexy employee, werewolf pack-leader Grant broke his no-involvement-with-humans rule and made a move on Talia. A month later the sex is still red hot and everything between them is perfect. Or so he thought. Until the night he shows up at her place expecting their usual ritual of mind-blowing sex and finds out she has other plans. And they don’t include him.

When Talia announces she’s tired of being his last priority, Grant realizes he might lose the only woman he’s ever cared about. He has to do something fast to fix their relationship, but she’s completely unaware that he’s not human. He’s not above using sex to bind her to him, but when she wants more than that he has a risky decision to make. If he admits the truth he risks not only his heart, but the safety of his pack and the existence of all supernatural beings as well.

Grant steered into Talia’s driveway and tried to slow his racing heart. It was no use. Knowing he’d be seeing and touching her soon, his body simply reacted. Every Friday night for the past month he’d been going through the same ritual. Get off work at the bar, drive straight to her place and lose himself in her all night. He didn’t even bother showering until he got to her house because she always joined him.

Afterward he took her hard and fast against the slick tiled wall, they usually made it to her bed. Sometimes they’d only get so far as the floor. Then they’d eat. The rest of the night he spent buried deep inside her. He wasn’t sure what he’d done to deserve her, but after a year of working with her on a sporadic basis, a month ago he’d finally thrown his no-employee—and no-involvement-with-humans rule—out the window and made a move. Technically he wasn’t her direct manager. She just worked at one of the bars he owned and ever since she’d started working there, he’d found himself making more and more appearances to see her.

Once they’d finally crossed that line, there was no going back for him. He could never be just her friend again. Hell, he’d never wanted to be her friend. From the moment she’d walked into Crescent Moon Bar looking for work, his entire body had flared to life with a raw, primal awareness that scared the shit out of him. He was two hundred years old and had always been in control of himself.

The second her subtle lavender scent, combined with something else that was all her had wrapped around him, his canines had lengthened and his cock had stood at attention.

As alpha of the local pack in Gulf Shores, Alabama he always had to be in control. He owned six bars and one hotel and provided work and lodging for his entire pack. Getting involved with a human—no matter how enticing she was—had never been part of the plan. But he couldn’t seem to help himself. Unfortunately she had no idea he was a shifter or that almost everyone she worked with, were shifters too. He needed to figure out a way to tell her, but that wasn’t going to be tonight. When he was around her, talking always seemed to take a backseat.

After parking, he hurried up the walkway to her three-bedroom bungalow house. As he raised his hand to knock, the door flew open.

Talia stood there with a surprised expression on her face. Her shiny pink lips formed an ‘O’ and then she frowned. “Hey, Grant.”

As he took in her appearance, a frown fixed on his own face. She wore a halter-style red dress that hugged her slim body in all the right places. And she was showing far too much skin for his taste. Not that he didn’t enjoy looking at her. He just didn’t want anyone else seeing so much of her body. At the bar she usually wore black pants and a black tank top and even that drove him crazy. Seeing her long, tanned legs bared caused a low growl to start somewhere deep inside him. Her long black hair, which she usually pulled back, fell around her shoulders and face seductively.

She was tall, maybe five foot eight or nine and in her heels she was even taller tonight. He still had to look down at her, but damn, his throat tightened as he raked an approving gaze over her. “You look…” Stunning, beautiful, like sex-in-heels… Too many words assaulted him.

She cleared her throat and raised one dark eyebrow as she stared at him pointedly. “What are you doing here, Grant?”

“It’s Friday,” he said, figuring it was explanatory. He’d instructed the manager at Crescent Moon Bar to give her Fridays off because it was one of his few nights off. He didn’t give a shit if he was playing favorites with his employees. Spending these nights with her was something he craved.

Her frown transformed into a scowl. “I know. I also know you haven’t called the past two days and I also know you just expect me to be waiting here every Friday night for you.” She placed a perfectly manicured hand on her hip.

He pushed out a long breath and racked his brain for the right thing to say. What she’d said was true. He hadn’t called because he hadn’t thought he needed to. He’d been dealing with issues at his hotel and two of his other bars. He’d barely had time to sleep the past couple days. Right now he felt raw and hungry. For her. And she was going out? “You have plans?”

Her head cocked to the side and a waterfall of her midnight black hair slid over one of her bare shoulders. “Like what, exactly?”

“Like sex.” The two words slipped out before he could stop himself.

She seemed pleased by his description which only infuriated him. Her full lips pulled up into a smile but just as quickly she glared at him, her green eyes narrowing. “Until you learn to pick up the damn phone and actually make plans with me, don’t expect me to be waiting around anymore. I’m not some whore for you to—”

“Talia!” He didn’t like to even hear that word on her lips. “I don’t treat you like that.”

She rolled her eyes. “Figures you’d focus on that. Fine, it’s fantastic and we both know it. But that doesn’t change anything. I need more and I’m tired of waiting for you to pull your head out of your ass and realize that. Until you figure some things out, I’m no longer available for you.” Turning her back to him, she stepped completely outside, pulled the door shut then locked it.

He started to say more when the short burst of a horn made him glance over his shoulder. One of Talia’s girlfriends—one of his pack members—sat in a black two-door sports car. Before he could turn back to talk to Talia, she was brushing past him and striding down her walkway toward the curb. She didn’t even give him a backward glance over her shoulder.

Just slid into the passenger seat and slammed the door.

“Well, shit.” Grant scrubbed a hand over his face. Everything she’d said was true. And when she put into words exactly what kind of relationship they had, guilt bubbled up inside him. It tasted bitter and foreign and he knew if he wanted to keep her in his life, he needed to make some changes. Fast.