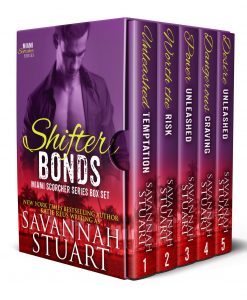 Set in beautiful, sunny Florida, the Miami Scorcher series features sexy dominant, alpha werewolves brought to their knees by their new mates. Whether the story features a DEA agent, club owner, a tattooed up mechanic, an enforcer or a former soldier the one thing these sexy wolves have in common is they burn up the sheets and are willing to protect the women they love at any cost.

In Unleashed Temptation, the sexiest man Carly’s ever met turns out to be her new boss… He also just happens to be a werewolf.

In Worth the Risk, one man is getting in the way of Marisol’s revenge…her mate.

Paz has a big secret. Unfortunately the enforcer and one of the oldest living werewolves on the planet will stop at nothing to uncover the truth in Power Unleashed.

In Dangerous Craving, Nissa has nowhere else to go. So she turns to the one man who broke her heart.