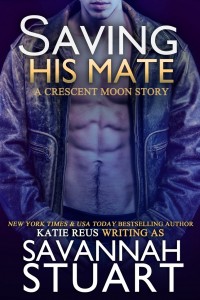 From the moment vampire bounty-hunter Rex Serano meets sexy shifter Margery, he’s smitten. When the alpha of the Kincaid pack asks him to join with them, he’s stunned by the offer, but the real draw is the beautiful, caring female who seems to want nothing to do with him.

Margery is the driving maternal force for her pack and she has one rule: she doesn’t date vampires. Years ago she was nearly killed by rogue vamps and she has no interest in getting involved with one now. No matter how sexy a certain, persistent bounty hunter might be.

When one of Rex’s hunts gets messy, Margery gets caught in the crossfire and he’ll do whatever it takes to protect her. They might be different species but the mating call is undeniable and too strong to ignore. Now they must find a way to reach common ground and trust their instincts if they’re going to fight for a future together.

“You look like a hobo,” Grant said to Rex, eyeing him with clear disgust.

“At least I don’t smell like one,” he muttered, shifting against the chair in the alpha wolf’s office.

Grant snorted. “That’s up for debate.”

Rex shrugged, not caring that he looked like he’d come straight from a low rent biker bar after getting in a fight with twenty bikers who deserved a good ass-kicking. Because that’s exactly where he’d come from. As a 250-year old vampire he needed to let out his aggression sometimes. He preferred sex—though it had been a while—but fighting worked just as well. “Fucking sue me.”

The alpha snorted again. “You sound so human when you say that.”

“So what’s going on? If I didn’t know better, I’d say you’re trying to move in on my territory.” There wasn’t an edge to the male’s voice so Rex knew he wasn’t being serious.

The truth was, vampires didn’t spend much time in shifter territory but over the last year Rex had ended up in Gulf Shores, Alabama multiple times because he’d been hunting rogue vamps, putting him directly into Kincaid pack territory. “Just another job. Foolish newborn robbed a powerful vamp and now I’m hunting him down.” And he was getting tired of doing the same thing over and over. For years he’d loved being a bounty hunter. Unlike other powerful, older vamps he’d never been able to put down roots with a coven. He hadn’t wanted to. It was odd but he felt more kinship with the wolf sitting across from him than most of his own kind. Wolves and other shifters weren’t cold or indifferent to the world like so many vamps.

Grant watched him for a long moment. “You sound exhausted.”

Rex half-smiled, not surprised by the other male’s observation. He started to respond when the door behind him opened. Before he turned he scented two females, one who was Talia, Grant’s human-mate-turned-shifter. He shifted in his seat and stood as the women entered. He nodded politely at both of them and waited until they’d entered before he sat back down. It didn’t matter how old he was, certain manners had been bred into him hundreds of years ago. Turned at the beginning of the American Revolution, to say he was from a different generation would be an understatement.

“Hey, Rex,” Talia said, hurrying to her mate. She practically jumped in Grant’s lap, wrapping her arms around his neck as she planted a noisy kiss on his cheek.

From the subtle scent of vodka wafting off her and the other female he vaguely recognized, he guessed they’d been drinking. And it was clear Talia wanted to be alone with her mate.

Rex stood. “Grant, I won’t be in town longer than I have to be. Thanks for letting me hunt in your territory.”

Keeping his arm wrapped around Talia’s waist as he held her in his lap, the male shook his head slightly. “I don’t care how long you’re here… And I’d like to talk to you about taking a permanent position with my pack. It’d mean no more bounty hunting except jobs I might need. But you could put down roots if you want to.”

The alpha couldn’t have shocked Rex more if he’d tried. Rex frowned, watching Grant as the other female sat in the chair he’d vacated with a sigh of exhaustion.

He ignored her and narrowed his gaze at Grant. He knew the alpha wouldn’t have made the offer if he wasn’t serious. Grant wouldn’t joke about something like that. “We’ll discuss this tomorrow. Alone.”

Grant grinned, as if he thought he knew Rex’s answer. How could Grant when Rex didn’t know—even if he was tempted. “Meet me at the house after dark.”

“I’ll be there.” He nodded once at Talia and started to turn toward the door when a subtle lavender scent rolled over him. His fangs ached at the sight of a tall, leggy female shifter standing in the doorway. With beautifully bronzed skin and a knee-length black dress that hugged her slender body in all the right places, his mouth practically watered as he drank in all her subtle curves. The dress tied around the back of her neck in a halter style and the way it pulled against her breasts showed enough cleavage that he felt like…hell, he’d never felt like this. For how slender she was, her breasts were surprisingly full. More than a handful and right about now, he could easily envision cupping them, licking them, teasing…

The dark-haired woman flicked a glance at him for a millisecond before looking right past him. He couldn’t stop staring if his life depended on it and she’d barely noticed him. Talk about a blow to his ego.

“Are you two hooligans done for the night?” the beautiful woman asked.

Rex stared, his gaze tracking her as she moved farther into the room. His heart rate kicked up a notch and he had to force it to remain steady, to appear as if he was unaffected. Unlike the human myths that said vamps didn’t have hearts, he definitely did. And right now his was beating out of control. What the hell was wrong with him? His fangs pushed at his gums, aching to be unleashed with an insistency he hadn’t felt in over two centuries. It was…

It was not what he thought it was. He refused to even think the words.