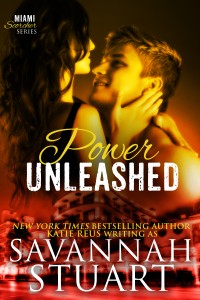 She has a big secret…

After a year in captivity, werewolf Paz Cabrera is trying to figure out her place in the world. While her sister’s new family is welcoming, Paz still doesn’t feel like she belongs to the Lazos pack. She has a big secret that could harm them all and give The Council ammunition to kill her. When The Council sends their legendary enforcer to hunt a rogue werewolf terrorizing Miami, she makes a shocking discovery about the one man she’s supposed to be avoiding. He’s her mate and she’s terrified he’ll uncover her secret.

He’ll stop at nothing to uncover the truth…

As enforcer and one of the oldest living werewolves on the planet, Adam Tucker had fated himself to a lonely life. After centuries by himself, he never expected to meet his mate while on the job, but now that he’s found her, he won’t let her go. Paz denies their connection, but she can’t escape the sizzling heat between them. No matter what it takes, he plans to uncover the truth behind her resistance and bond her to him forever.

IMPORTANT NOTE: Power Unleashed was previously published elsewhere. It has been revised and edited.

Adam parked his rented truck behind an older muscle car near the end of the winding, private driveway. When Thomas said they were having a party Adam hadn’t realized he meant the entire pack. And from the looks of it, half of Miami.

As he walked up the stone drive he took in the vehicles. They were all a little older but in good shape. The family obviously didn’t like to show off, which made sense. Drawing attention to yourself was never a good idea, especially for shifters. He started to knock on the intricate—probably custom carved—wood door when it flew open and two younger she-wolves nearly ran him over.

“Sorry!” one of them yelled over her shoulder as they raced toward one of the cars.

Something foreign twinged deep in his chest. He might work for The Council but he didn’t consider any of them his family. He had no pack, no real friends, no real home. Not anymore. His life was fucking lonely and something told him that spending time with the Lazos pack would only remind him of what he was missing and would never have again.

Shaking his head, he stepped farther into the foyer. To the right was a giant dining room with a huge spread of food. A cake sat in the middle and there was a smorgasbord of other food surrounding it.

“Hungry?” Thomas asked as he joined him.

“I’m okay for now. Could go for a beer though.”

Thomas grabbed his shoulder in a light, almost brotherly grip. “Come on, we’ll get you settled.” The action was unexpected and it also reminded him that he couldn’t get too close to these wolves. He was there to do a job and if anyone had acted against The Council’s code, he’d have to turn them over for judgement.

The dining room connected to an even larger kitchen. A sea of mainly dark-haired wolves mingled around in groups of two and three. Only a few stood out. A tall, pretty redheaded human. From his files, he knew she was Nick Lazos’ mate and new wife. And of course Marisol, Stephan’s mate. She was a brunette like most of the Lazos’ but she was Hispanic, not Greek. When he met Shea Hart’s gaze, the tall blonde wolf he needed to question, she quickly averted her eyes and said something to the much shorter brunette she-wolf she was talking to.

The petite wolf swiveled to look at him and when their gazes locked, his heart actually stuttered in his chest. It was Paz Cabrera. He’d recognize those midnight eyes anywhere. The dossier he had on her didn’t do her justice though. He couldn’t tear his gaze away from those intoxicating eyes. She was pretty, yes, but it was those damn eyes that drew him in. Dark, exotic and full of passion and life. After what she’d been through, the fire he saw there surprised him.

When she turned away from him, he mourned the loss like a physical blow. It seemed as if he’d been staring an eternity, but in reality only seconds had passed.

“Here ya go.” Thomas handed him a beer and nodded toward Paz and Shea who stood by themselves near a glass door that lead to a back patio. “I’m sure you already know, but those are the she-wolves we rescued. I’ve spoken to them and they’re ready to talk to you when you want.”

“Now’s as good a time as any.” The truth was, he could have waited. Would normally have preferred to wait and acclimate to his surroundings, but the wolf inside him was desperate to be alone with and talk to Paz. Hear her voice, draw in her scent. Something. Anything. He spoke low enough for only Thomas to hear him as they approached the women. “I’ll speak to Paz first.”

A burst of primal protectiveness rolled off Thomas and nearly bowled Adam over with its intensity. He had to stop the growl that started in the back of his throat. He had no claim over Paz and even the thought was ludicrous enough that he almost laughed at himself.

Both she-wolves nodded politely, but he didn’t miss the light sheen of sweat that had formed on the blonde’s brow.

He pulled the sliding glass door open and kept his attention on Paz. “If you don’t mind, I’d like to ask you a few questions and just get them out of the way now.”

She shot a quick, guarded look at Shea before returning his gaze. “Of course.”

Adam slid the door shut behind them. He’d never been in Florida in the fall and the weather was mild and perfect. A light breeze pushed up from the Atlantic. The salty smell rolled over him with a subtle freshness and he realized why they’d chosen to settle in Miami.

Before he’d taken two steps, she blurted, “I thought you’d be taller.”

He couldn’t help himself. A sharp bark of laughter escaped at her words.

Horror immediately covered her pretty face and her very full lips formed a perfect O. “I’m so sorry. I can’t believe I said that. I…I haven’t been out in public in a year. That’s my only excuse.”