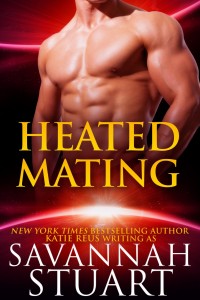 After being rescued from her dying planet and brought to Lumineta with other humans, Saroya has always been fascinated by Linc, a formidable warrior. She mates with him and his brother, and has never understood his reluctance to be near her or even touch her. When his brother dies and he makes it clear he’s sexually interested, she can’t fight the incendiary attraction between them.

but things get more complicated in the light of day.

Linc has wanted Saroya from the moment he met her—and throughout her short mating with his brother. His culture might encourage two males to mate with one woman, but Linc could never share Saroya. Not even with his brother. When his brother dies, leaving her unmated, Linc intends to claim her. Before he can win that battle he’ll have to swallow his warrior pride and win her heart once and for all.

As Linc stared at Saroya’s exposed back, he understood his dead brother’s love of the dark-haired beauty.

The funeral pyre burned before them and the entire clan. The firelight played off the sheer shift Saroya wore. Compared to what most of the females of the clan wore her clothing was more than acceptable but he hated that the material dipped low, exposing most of her back. The arch of her spine was delicate and beautiful. He wanted to trace his fingers up the length then follow with his tongue. Unlike the females of his people, Saroya and the handful of other women they’d rescued from the dying blue planet were smaller, more fragile. Not weak, they’d proven that much. Just different in some ways.

Ever since his brother Gage had returned from that fateful mission with Saroya and ten other foreign females in tow, Linc had cursed the Goddess that he’d busted his knee up the week before and Gage had met her first.

If he hadn’t hurt himself during training he’d have been on that mission. A mission his scholarly brother had only been on to collect data. And Linc would have seen Saroya first. She’d have been his and only his. It didn’t matter that his society consisted mainly of male-female-male joinings. And it didn’t matter that Gage and Saroya had tried to welcome him into their bed on more than one occasion. None of that shit mattered because he didn’t share.

He would not share her. With anyone. Not even his own brother. So he’d always declined their invitations. He couldn’t be sure but she seemed to think he preferred the opposite sex. That was fine with him. Let her have her assumptions.

A few wisps of her dark hair had come loose from the clip she’d secured it with. As he watched her, he noted a small tremble race through her. His people didn’t show much emotion but hers were very different as he’d learned over the past six moon cycles. Though he couldn’t see her face, he knew she was crying. Linc wanted to reach out and comfort her but he was a warrior. That wasn’t done.

When she shifted her weight forward, as if she were ready to throw herself off the cliff and onto the burning pile of her lover’s remains, he felt his entire fucking world shift. He nearly lost a century of his life.

Lightning fast, Linc lunged at her and wrapped his arm around her waist in a hard, tight grip. Even if she wanted to leave this life, this planet, he would not let her. Could not. He refused to live in a world where she didn’t exist.

She struggled against him, silently crying until he twisted her around to face him. Barely reaching his chin, she wouldn’t look at him as she beat his chest a couple times with her fists. Her words were incoherent and laced with grief. He was pretty sure she called him a heartless bastard too. He wasn’t sure why, but the words pierced him. Hard. That was his brother slowly turning to ash down there. He was hurting too, even if he couldn’t show it. And he hated himself for wanting his dead brother’s mate so badly.

Just as suddenly, she stopped fighting and molded against him. Her arms wrapped around him and she buried her face against his neck. Shame burned through him as the rest of the clans present tried not to stare at the spectacle they made. No one but Saroya and his brother knew that theirs had not been a true bonding. That only Gage and Saroya had been lovers. That he’d just been a roommate. Now surely everyone knew that she’d preferred his brother over him.