Falling For His Mate 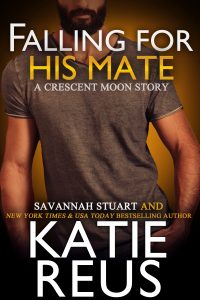 Second in command of the O’Shea wolf pack, Andrew Reid screwed up and let Charlotte walk away from him. Now that he’s come to his senses, he’s determined to win her back, no matter how much he has to grovel. Because she’s a woman worth fighting for.

She’s not willing to trust him again.

Charlie thought Andrew was different from other males, that what they shared was real—that their connection was the rare mating pull. But a true mate wouldn’t have ghosted on her the way he did. So no matter what he wants, she’s not playing his games. To capture her heart for good, he’ll have to prove he’s worthy of a second chance. Even if that means he has to give up everything, including his pack.

“I heard the new traded packmates are here.” Erica stepped out of one of the private rooms they used for massages, eye lash extensions and waxing.

They were careful never to talk about anything pack related in front of humans. At best, people would think they were crazy. At worst… There was a reason the supernatural world kept their existence a secret from humans. The humans couldn’t handle it. Not yet anyway. Maybe one day. Charlie sure hoped so anyway. It would be nice not to have to hide her dual nature. But humans liked to worry about too much stuff; like what other people did in the privacy of their bedrooms. It would be a while yet until they could deal with the reality of shifters and vampires.

“Yeah?” Charlie had called her friend Alyssa, curious about who would be sent from the O’Shea pack, but her friend hadn’t returned her calls or texts. Which wasn’t like her, but Alyssa would have been prepping for the upcoming alpha meetings with her mate. Not to mention she had a ton on her plate in general. Still, a part of Charlie wondered if it was because he would be coming down to Orange Beach.

But no, Andrew was second for the O’Shea pack. No way would he be down here. They’d need him to take care of everything in their territory while the alpha couple was gone. Which was good. Because she didn’t want to see his stupid ass anyway.

His stupid, very fine ass. Gah. He was almost a foot taller than her, but she wasn’t blessed in the height department, so that wasn’t saying much. At five feet three inches, most of her pack towered over her. Well, except her jaguar packmates. Since they’d joined, at least she wasn’t the only shorty.

“Yeah… what are you thinking about?” Erica held her broom at her side and eyed Charlie carefully.

Her friend snorted. “Yeah right. You just got the weirdest look on your face. And your scent is weird too. What’s going on?”

Charlie’s scent was probably crazy because when she thought about Andrew Reid, she got turned on and pissed off simultaneously. Her emotions went haywire and neither her human nor wolf side had any control. She hated that the male made her feel unbalanced. It had been like that since the moment they met.

“Oh, look alive. Sexy male walking inside in five, four, three…” Erica went back to sweeping up the cut hair.

Charlie turned toward the door, not because she cared about the sexiness factor, but because she had a job to do. All thought fled her mind the instant Andrew sexy-as-sin Reid stepped into her salon.

Against her will, she sucked in a sharp breath. His dark hair was a little longer than it had been the last time she’d seen him. He still had that sexy beard and even though she hadn’t thought the whole ‘lumberjack’ look was hot before him, he pulled it off. The male looked as if he should be cutting down trees and carrying off the trunks in one arm. With broad shoulders, icy blue eyes that at one time had captivated her… Nope. Nope. Nope. Absolutely not going there.