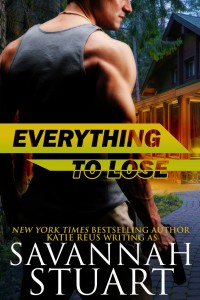 He made the worst mistake of his life…

Sean Sullivan refuses to let his wife go without a fight. He made the worst mistake of his life a year ago by threatening they get a divorce. He only wanted her to stay in town and out of another warzone, so he gave her an ultimatum. No one was more surprised than him when she walked out the door and never looked back—and he’s regretted it ever since.

Now that she’s back stateside, he’s not letting her go…

Walking away from her husband was the hardest thing Caitlyn ever did. But things had become so fractured between them, space had been the only option. She’s back home and finally ready to convince him to sign the divorce papers. He’s just as determined to convince her they’re meant to be together. He knows she still loves him. When killers target them he’ll use any means necessary to keep her safe and win her heart again. Even if he has to kidnap her and tie her to his bed to do it.

Caitlyn Sullivan pushed her Jackie-O style glasses back on her head and took a deep breath before getting out of the yellow taxicab. She could do this and she would do this. Just hand him the divorce papers. Simple enough. Yeah right, her inner voice screamed. When had things with Sean ever been easy?

“You okay lady?” The driver with the thick Jamaican accent asked her.

“Huh? Oh, yes, I’m fine.” That was when she realized she’d been staring at the three-story building of the Orlando police department without moving. “Now remember, wait here. I’ll be back in less than fifteen minutes. Maybe sooner.”

He shrugged. “It’s your dime lady.”

Putting one black heeled shoe in front of the other, she forced herself forward. She normally didn’t wear heels but facing Sean called for some serious battle gear. So she’d opted to wear three-inch sling-backs to boost her confidence. Her soon-to-be ex-husband had been refusing to sign their divorce papers for the past year and she was sick and tired of his childish games. He couldn’t handle her work as an aid worker, so there really wasn’t much of a reason to prolong the inevitable.

She followed two uniformed police officers into the brick building and fought the rush of nausea threatening to overwhelm her. She clutched her purse tighter against her side, as if it provided some sort of protection.

She stopped at the circular help desk. After two solid minutes of chatting on the phone, the college-aged girl behind the desk finally looked up, an annoyed expression on her pretty face. As if Caitlyn asking her to do her job was an inconvenience. “Can I help you?”

Normally she didn’t deal well with attitude but her stomach was too twisted to care. “Is Detective Sullivan in?” Somehow her voice came out normal.

The girl rolled her eyes. “Yeah and no surprise, he’s in a foul mood. Third floor.” She pointed behind her with a pen. “The elevators are down that hall to the right.”

Caitlyn already knew that but she nodded and murmured thanks anyway. She’d secretly hoped he wouldn’t be in. He did so much undercover work, the chance of him actually being at the station was slim.

The short ride to the third floor did nothing to calm her nerves. She turned left in the hallway and tried to avoid eye contact with everyone. This wasn’t the best of circumstances and she didn’t feel like explaining why she was there to any of Sean’s coworkers.

“Caitlyn? Caitlyn Sullivan, is that you?” a familiar looking man asked. She thought his last name was Ramirez but couldn’t be sure.

“Yes, can you tell me where Sean is?” She tried to paste on a smile but even that was too much. She just wanted to get this over with.

He completely ignored her question. “I thought you were in Afghanistan.”

“I was. Where’s Sean?” Her words came out more forcefully than she intended but she couldn’t do small talk. She was close to vomiting on her shoes and she couldn’t shoot the shit with a stranger in the hall.

“Oh, right. Sorry, he’s just going over some paperwork in the one of the interrogation rooms.” He pointed down the hall. “Second door on the left.”

“Thanks.” She pulled out the manila packet she dreaded giving him. Bile rose in her throat but she pushed it down.

“No problem. Hope to see you around more.” He waved and disappeared into one of the other rooms.

She stopped in front of the door and peered through the square glass window. Sure enough, there sat her husband. Heat pooled between her legs and all the air left her lungs in one annoying whoosh. His dark brown hair was, of course, too long and he still had that familiar semi-permanent five o’clock shadow. And he looked tired. Lean, tired and as sexy as ever. She took the quiet moment to admire his profile. His brow furrowed as he pored over papers.

That was an expression she was accustomed to in more ways than one. When Sean did something, he gave it his all, whether at work or in the bedroom.

She squashed the longing threatening to bubble up and opened the door.

He looked up once then glanced back down. She stopped in her tracks, shocked by his response but his head whipped back up just as quickly. He blinked once. “Caitlyn?” His voice was strangled and he immediately stood. The scraping of the chair against the tile was deafening in the small room.