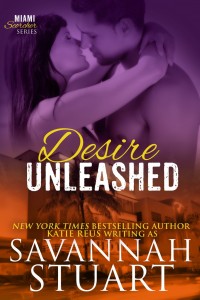 She triggers all his possessive instincts…

Turned into a shifter against his will, Ethan Connell would have died if the Lazos pack hadn’t given him shelter. While he’s grateful to all of them, there’s one she-wolf he can’t get out of his head. Sweet, sensuous Caro, who not only saved his life but sets his body on fire and triggers every possessive instinct he has. But she’s made it clear she just wants friendship from him.

At first he scoffs at the idea and after months of biding his time, he makes his move. Instead of rejection, she meets him with a passion every bit as intense as his own. But Caro was burned in the past and won’t admit she wants more than just a physical relationship. Ethan has no doubt that he’s playing for keeps—if she’ll only let him.

Ethan tugged on his T-shirt as he trudged across the patio. The run along the Lazos’ strip of private beach was always exhilarating but after six months he still hadn’t gotten used to the fact that he could turn into a wolf. Some days it was just too surreal.

Little more than a year ago he’d simply been a human. An ex-soldier working for various security companies across the globe. Until a crazy doctor had injected him full of some sort of organic serum that turned him into a wolf. Or werewolf to be precise. He’d been a mess after he’d escaped and if it hadn’t been for the Lazos pack, the local shifters who made their home in Miami, he’d be dead. Or worse, locked up somewhere in a government lab while scientists did experiments on him for the rest of his natural life.

He opened the sliding glass door to the house where he lived with Paz and Adam, also new members of the pack.

Paz looked up from where she was dicing tomatoes. The petite woman smiled warmly as she always did. “Hey, how was the run?”

“Good.” He racked his brain as he tried to think of something normal to say. He always felt awkward around her. Okay, that wasn’t fair. He felt awkward around everyone. His new pack had all been born with the ability to shift to animal form. He was a freak of nature who’d been turned by a mad doctor. He wasn’t one of them and he wasn’t sure he’d ever fit in. “Uh, you need help with anything?”

She shook her head and smiled softly. “No, but Caro will be here any minute if she’s not already. She’s bringing over decorations for tomorrow’s party. Will you help her carry everything in?”

At the mention of Caro, his throat went dry so he simply nodded. As he stepped outside the two-story palatial house, he spotted Caro driving up the stone driveway. Though he could only see her silhouette through the windshield, he could picture her anyway. Could see her if he simply closed his eyes. The petite, dark-haired she-wolf had starred in all of his fantasies over the past six months. Her shoulder-length hair was always pulled back in a ponytail or some sort of twist. Just once he’d like to pull it free and watch it fall around her face as she rode him. Before being turned into a shifter, sex had always been a pretty regular part of his life. He’d never had a serious relationship, had never wanted to. Since being turned he hadn’t been with anyone—he hadn’t wanted to. The only female he craved was Caro.

His heart pounded erratically and when she climbed out of the vehicle, full-blown lust surged through him. Almost as if she could read what he was thinking, she slammed the door shut and muttered something under her breath. Hell, maybe she could read his emotions. According to his mentor Adam, all shifters had learned to cover their emotions since they were pups, but Ethan was still learning to hide his. Hell, around Caro he didn’t want to mask his desire. He’d been trying to get her alone for six months and he wasn’t going to fuck up his chance to ask her out. “Hey, Caro.”

The dark-haired doctor ducked his gaze as she pulled the trunk of her car open. “Hey, Ethan.”

He hurried over and took the wide box she’d lifted from her hands, forcing her to look at him.

He scrambled to find the right words. “Listen, Caro. I never got to thank you properly for all you did.” When he’d first been found by the Lazos pack he hadn’t been able to control his shifts and it had been killing him. Even though Caro was a pediatrician, she’d used all her medical training to help keep him alive. In short, he owed his life to her.

“I’d like to take you out to dinner. Saturday if you’re free.”

Her eyes darkened for a moment but she simply shook her head. “Thank you for the offer, but it’s just not going to happen.”

Sharp disappointment forked through him. He might not be as advanced at controlling himself but he could sense she was attracted to him too. “Why not?”

“I think you’re interested in more than thanking me?” Her voice was soft and intoxicating.

He could listen to her all day. He nodded at her question. Hell yeah he was interested in doing more than thanking her.

“It would be too complicated, okay? You’re young—”

“I’m almost thirty,” he ground out.

“And I’m almost two hundred. You have a lot to learn about yourself and until you do, the last thing you need is to worry about dating. Besides, I don’t want anything casual anyway.”

“Neither do I.” The words came out more forceful than he’d intended, but as soon as they were out of his mouth he realized he meant them. The woman had consumed his thoughts for months. He didn’t understand his wild attraction to her, but it was anything but casual.

Her smile was almost patronizing, but he guessed she was trying to let him down easy. She was just nice like that. “You say that now, but trust me, in a few years you’ll figure out what you want and you’ll settle down with a she-wolf your own age.”

“I’m not some teenager going through puberty,” he snapped, angry at her words. They looked the same age anyway so he wasn’t sure what her deal was.

Her expression immediately softened and it made him feel even shittier. She was just so damn sweet. “I know that. You’re a very attractive wolf and I’d be blind not to see that, but… All I can offer you right now is friendship.” She almost seemed wistful as she said it but quickly continued. “If you’re okay with that, then good. If not, let me know now because we can’t hang out otherwise.”

She nodded once and he wanted to tell her hell no, that wasn’t enough. But he wasn’t stupid. Or maybe he was.

“Okay, friends,” he managed to squeeze out.