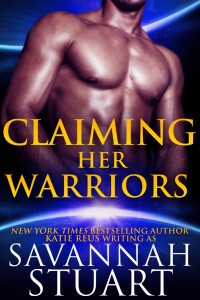 Two brothers want to possess her…

After her planet was destroyed, Brianna was rescued by two fierce and desperately gorgeous warrior brothers. Aeron and Hauk. They want to keep her, protect her, mate her. But what the brothers wanted from her was too much to handle. Settling into a new culture was hard enough without dealing with the custom that dictates she mate with two males. So she pushed them away.

They’ll do anything to protect her…

An attack sends Brianna back into the arms of the sexy brothers. Now they’ll do whatever it takes to win her over. But can Brianna go against the conventions of her human nature and accept both warriors as her mates? It might not matter because someone is out for blood and it’s up to Aeron and Hauk to defend her against a deadly enemy.

Brianna hurried into the medical building, thankful that it was only four blocks from where she worked. Her flat sandals made a soft scuffing sound as she crossed the tile floor into the main lobby. Unlike the long-destroyed hospitals from her home planet, Lumineta had what they called medical buildings.

They were five-story dome-shaped buildings with skylights that flooded the structure with natural light. There was only one in each city on the planet because they weren’t in use much except for when the warriors were injured. Diseases were almost unheard of except for a few odd cases, as were injuries. And the Luminet people weren’t at war with anyone right now. They kept their world well protected.

Before she’d made it to the information desk, a female healer wearing a sage green tunic and matching pants approached her. “Are you here for Aeron?”

Brianna nodded, surprised the healer knew that. “Yes, how—”

“Saroya told me she’d called you and I knew you’d be human like her.” The healer smiled gently.

Saroya was Brianna’s best friend and one of the few human women rescued over twelve moon cycles ago. Like the other human females now living here, she would have been recognizable by her shorter height alone. But Brianna had red hair, a rarity in this place, so she stood out even more.

She’d met Saroya on the long ride here from their now dead blue planet, and the two of them had been close ever since. Saroya was mated to Linc, another warrior and friends with Aeron a man who…well, a man who meant a great deal to Brianna even if he was frustrating.

The healer pointed to one of the transport platforms. “He’s in room 515.”

Before she could ask if Aeron was okay, the woman had turned and was walking toward another healer. Well, Saroya would have told Brianna if Aeron had been seriously injured, wouldn’t she? Her friend’s message had been brief but she hadn’t sounded too worried. Brianna’s heart rate jumped up a notch as she hurried to the transport platform. She placed her hand on the scanner then typed in the room code. Seconds later she was flashed to Aeron’s room.

Blinking as the bright light faded, it took a moment for her to adjust to her surroundings. She’d been living on Lumineta for a while and she still hadn’t gotten used to their way of fast travel. It was only possible for short distances, but it was a little disorienting. As her surroundings came together she saw Aeron standing next to a bed large enough to accommodate his six foot seven inch frame. His back was to her and he was pulling his tunic over his head as if he planned to leave.

She stepped from the round, raised platform, hurrying toward him. “What are you doing? You shouldn’t be out of bed.” Okay, she didn’t know that for sure, but he had a big bandage wrapped around his shoulder and under his left arm.

He appeared surprised to see her. His blond hair was rumpled, but those green eyes were piercing and assessing as he raked a hungry gaze over her. It took him a moment to speak. “It’s just a training accident, I’m fine,” he said gruffly.

Aeron’s expression softened as he watched her. Then, it was as if he changed his mind. “But maybe you’re right, I am feeling tired.” In a few fluid movements, he stripped his tunic back off and laid on the bed. Stretched out on his back like that he looked like a golden god. Like one of the Vikings from her history books. Muscular, toned, taut… Her eyes trailed the length of his long, lean body from chest to toe then she immediately felt guilty.

When she met his gaze he was watching her with barely concealed lust. Like always—ever since they’d met. Burying what that evoked inside her, Brianna hurried to the side of the bed and perched on the mattress.

“Saroya left a message that you were injured, but didn’t give me any details. What happened?” Unable to stop herself, her eyes roved over his chest and arms again. Other than the white bandage covering whatever had happened to him, he looked good enough to eat.

“It was just a training exercise. No big deal.” His deeply spoken words drew her eyes back up to his face. He watched her intently and all she could think about was their last time together. It had been one moon cycle ago but the way he was looking at her now made her feel like it had happened yesterday.

He’d made her come first with his hands, then his mouth, then… She couldn’t even think about that day. As she felt warmth spreading up her neck and cheeks she cursed her fair coloring. Thanks to being a redhead she was cursed with showing all her emotions.

“I’m glad you came to see me though,” he murmured, that deep voice rolling over her like liquid sin. “I’ve missed you.” The words seemed to be torn from him, as if admitting that was difficult.

She swallowed hard. “I’ve missed you too.” One moon cycle wasn’t that long, but it had sure felt like it. And after receiving that call from Saroya she realized that whatever issues she had with Lumineta’s custom of male-female-male joining, she had to get over it if she wanted to be with Aeron. If she had to mate with his brother too, well, they would make it work.

When Brianna heard he’d been injured, her entire world had tilted on its axis. She didn’t want to live without Aeron.

He appeared surprised by her words, but he moved lightning fast as he grabbed her hips and pulled her over his lap so that she was straddling his waist. “How much did you miss me?” The wicked tone she recognized was there along with his impressive erection pressing against the juncture of her thighs. Her nipples tightened and her inner walls clenched in anticipation of what she knew he could do to her body. Too bad they had so much clothing in the way.

With the intention of moving off him, she placed her hands on his chest. He’d been injured and she didn’t want to make it worse. All that power thrumming under her fingers made her shiver and instead of pushing, she curled her fingers against him. “You’re hurt and—”

“And you can make me feel better.” She wasn’t sure why it happened every time he spoke in that low tone, but it was like his words just wrapped around her, making her entire body tingle in awareness.

“I don’t think you’re hurt at all,” she muttered, but didn’t make an attempt to move off him.