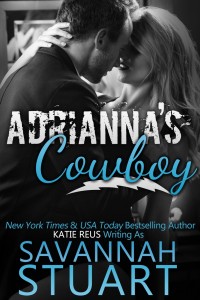 Sam Blackwood has been fighting his attraction to Adrianna Campbell for longer than he’d care to admit. Four years ago he almost gave into that temptation, but stopped just as things were about to get interesting.

Now that she’s back, he’s not letting her go…

When circumstances force them to share a roof, he’ll use any means necessary to tie her to his bed. And he’s not above playing dirty to keep her there.

NOTE: Adrianna’s Cowboy was previously published elsewhere. It has been revised and edited.

The sound of a car door slamming stopped him. He rushed back to the front door but before he made it, the door swung open. A gust of icy wind blasted him but he could barely feel it as unexpected heat swept through him.

It was her. The woman he’d wanted for longer than he cared to admit. Big blue eyes he remembered well stared at him with raw pain. She had the type of eyes a man could drown in if he let himself.

“Sam.” The ragged way she said his name tore at his heart.

He took a few steps toward her, closing the distance between them. He’d regret holding her later but for now he didn’t give a damn. Tears spilled down her fair-skinned cheeks as she stepped into his arms and he fought the guilt he experienced at actually enjoying holding her slim body against his.

Her strawberry blonde hair was shorter than he remembered. She wore it closer to her shoulders now. And it was straight, not wild and curly like before. Of course he hadn’t seen her in about four years. Things and people changed. One thing was for sure, his attraction to her hadn’t.

She was also smaller, leaner, than he remembered. Everything except her breasts of course. They pressed against his chest and even though she had on a thick sweater, he knew what they looked like. Knew what they tasted like. Perfect rosy buds he’d kissed and sucked on until she came. To his horror, his cock lengthened as memories assaulted him.

Abruptly she pulled back and stared up at him through tear laden eyes. “Are you…”

He cleared his throat but didn’t answer. To his surprise, an unexpected grin spread across her face and she laughed. Actually laughed. “You always were a randy bastard,” she murmured, as she stepped out of his arms.

Yeah, only for you. “Do you have luggage?”

“Everything’s in the car. I can get it later—”

But he was out the door before she could finish. He found her car unlocked so he lugged out a suitcase that should have its own zip code. Looked like she was planning to stay awhile.

The thought gave him a moment’s pause but he shoved it away. Adrianna might have been interested in him when she was young and too naïve to know what she wanted but things were different now.

When he came back inside, he found her sitting at the kitchen table sipping on a beer.

“Not really. Maybe this beer will dull some of my senses.” Her laugh was wry and full of pain.

“I don’t want you to worry about anything, Adrianna. I’ve talked to the funeral home and your father’s lawyer. Everything’s being handled.”

She stared at her beer. “He always said he wanted to be buried out by that old sycamore tree.”

He pulled out the chair and sat across from her. “I know and we’re going to do exactly what he requested. Listen, why don’t you settle in and get some rest? There’s nothing you can do until tomorrow anyway.”

For a moment he thought she might say more but instead she simply stood. “Okay, just lock up on your way out.”

“I live here now.” The words sliced through the quiet room, effectively sucking all the air out with them.